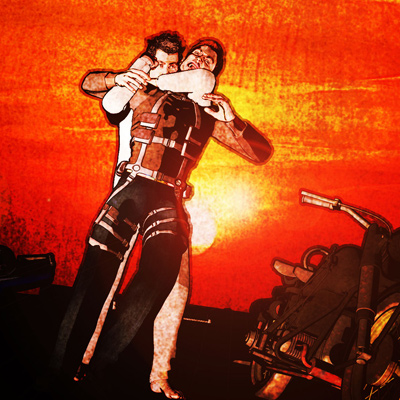 A scene from Chapter 1.2 in Book of Carrot, my novel about the end times. READ it here http://wp.me/pbg0R-9B

In this awesome illustration by freelance web UX and designer John Garrett, the main antagonist (the bare-footed man) has a locking hold on the main protagonist (John).

I’d also like to mention that John Garrett has the best about page that I have ever seen during my 16 years as an online professional. See it here.

“We’re not thugs. We’re not killers. You and I: we don’t kill,” the barefooted man whispered in John’s ear. “We don’t kill because we’re not takers.”

“But I’ve been waiting for you, John. I’ve seen you in visions and dreams. So here you are!”

John struggled to break free. The bare-footed man replied to John’s struggle with a kiss on the cheek.

“In some of my visions, you’re digging and poking around in the dirt and mud for carrots. Like a pig pushing its nose through the slop!”

“What do you make of that, John-boy? Does God have a sick sense of humor or what?!”

“I LOVE THIS BOY’S SPIRIT! WITH THREE BOYS LIKE JOHN, THE WHOLE WORLD WOULD BE MY OYSTER!” he shouted.

Then he whispered in John’s ear.

You’ll try and try. But you always fail. I’ve seen it in visions. Three times, you try. Because without me there’s no you. And without you, there’s no me.”

Note: You can submit fan art to stan(dot)faryna(at)gmail.com. Please provide contact information (FB, website, etc. so I can include it like I’ve done above). Unless otherwise specified, all works submitted will be considered as released by the author under the Creative Common’s Attribution-ShareAlike CC BY-SA.

This entry was posted on Wednesday, June 8th, 2011 at 9:27 am and is filed under Art and Literature, Book of Carrot, Film and Video, Games. You can follow any responses to this entry through the RSS 2.0 feed. You can leave a response, or trackback from your own site.