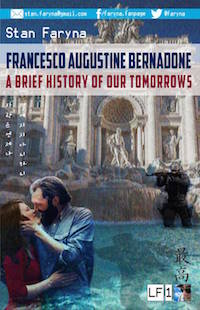 In 2026, hundreds of millions of gamers hustle in an epic, virtual reality to win real cash prizes. Zombies, ruthless players, scarce resources and menacing artificial intelligence are just a few of the challenges in ‘Jacob’s Trouble’, where less than one in a thousand manage to level up, grind for gear and avoid permadeath in order to loot hidden treasures and find life-changing wealth.

Recently unemployed, Francesco sells his father’s legacy, a Rolex watch, for guidance in the game. Caught up in the naive hope he’ll win the prize money for an experimental, nanobotic cancer treatment for his wife, the ex-janitor begins an adventure that offers all the promise of redemption, but far greater challenges than he ever realized.

Can Francesco, an eighty-year-old non-gamer, find windfall and fortune in this dark and dystopic virtual reality game? Zombies, guns, machetes and death in a game might seem inconsequential, but the cost of failure is a reality this elderly man can not bear.

Get Francesco Augustine Bernadone at Amazon:

Recommended reading for trips to the beach or park, coffee shop stalking, lunch hours, lazy afternoons, white nights, and public transit such as planes, trains, buses and ferry. It also makes an excellent gift for those who do those things.

This entry was posted on Monday, May 22nd, 2017 at 6:07 pm and is filed under Uncategorized. You can follow any responses to this entry through the RSS 2.0 feed. You can leave a response, or trackback from your own site.