Below is a poem by Simon Curtis: Comet Over Greens Norton. Like the political scandals, natural disasters, fears and anger that ripple through the milky (sour) radio and tv waves (or remain ignored for obvious and not so obvious reasons), Curtis’ poem reminds me that God is working. Sometimes, in strokes that paint a bigger picture than we will ever see with our own eyeballs.

But, perhaps, our imagination can grasp the square when we have seen the corner. Just as Confucius suggests of the gentleman. Perhaps.

The past repeats itself – this is a quaint yet profound reflection on the cyclical nature of things. And the evidence is overwhelming and undeniable to all but the most obtuse. Or intellectually impaired.

That God is working.

What is the function and destination of God’s work?

Einstein’s pursuit of such questions took him to the theory of relativity. Thomas Aquinas, The Summa Theologica. Raphael, the painting, The Engagement. Carl Gustav Jung, to a theory of personality – which modern psychology has abandoned for lack of intellectual and intuitional capacity to extend his vision further. Or even apply the legacy of his thought and work.

Perhaps, this too is why the Founding fathers of the American Experiment laid out the most ambitious of plans for a nation.

The U.S. National Archives where the Declaration of Independence and U.S. Constitution are preserved and exhibited.

As much reason as there is to fear, rage and protest God’s work, there is more reason to wonder, thrill and find great inspiration. And that, specifically, is what Curtis’ poem did for me. It reminded me of the wonder, majesty and bigness of God’s work. Perhaps, it will do it for you…

Remote over Allibone’s farm
On its orbit hurtling away,
And due to return from the depths of space
In four thousand years, so they say;

As far ahead as Homer is back,
Two million calendar days.
To focus true on time-scales like that
Unnerves to the quick as I gaze,

Stood at midnight on Blakesley Hill
In the frost by a neighbour’s fence.
What on earth will Hale-Bopp look down on,
Four millennia hence?

REM, It’s the end of the world as we know it

In the fearsome face of unprecedented political scandal and tyrannous masquerades behind untenable promises for peace, security and prosperity, scientists argue the risks of x-class solar flares, falling stars, melting glaciers, bee death, epidemic and hyperinflation. We step forward to the brink of a world war and back again, but the leap into the inferno, the fateful decision – it belongs to the ambitions and vanities of a few – none of whom are greater in intelligence, wisdom or virtue than you or I.

It is like watching the perfect storm. The bright flashes dance and shoot across our eyes. The roar, rumble and growl of thunder shakes the world.

Some will lift up their hearts in excitement and anticipation. Others will stay still and quiet. Take cover. We are not masters of our destiny, life, property, and happiness – this is what natural disasters remind us. And man-made disasters (environmental, political, social and economic) – they too remind us of our frailty and vanities.

His lightnings lit up the world;
The earth saw and trembled.

For those who put their faith in their own prudence and capability, they will prepare for the worst. At great cost, effort and sacrifice – if they have any sense of justice, conscience and freedom. The combination of a lack of spiritual hope and a lack of preps is evidence of an inferior intelligence and/or moral character. Such optimism is the refuge of the domesticated and pitiful slave bound by the necessities and envies of today.

For those who drink from the waters of faith, God is working in the storm – regardless of the apparent, invisible, and heart-breaking casualties. Two weeks of preps and certain self-sufficiency is prudent, but the real work is to love strongly (without fear), to give and lift others up (including and beyond our circle of family and friends), and inspire the same duty in the hearts of the human family.

Love shines brightest in the darkness.

I find myself in need of this wisdom. Often.

How not to Write Poetry

Season 3 Finale of The Walking Dead

Click and buy the mug shown below and help feed kids. 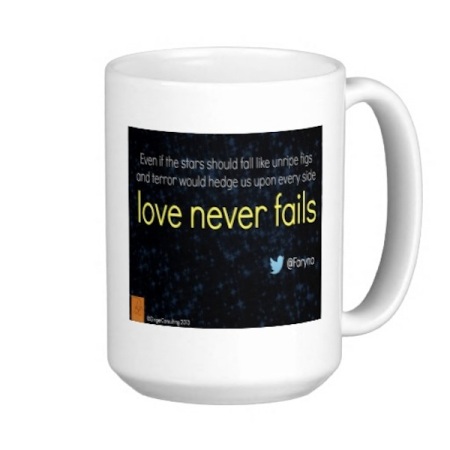 Of Internets and Avalanches

Of Internets and Avalanches

Shawn Colvin , Shotgun Down The Avalanche

I’m disappointed – not disillusioned. I’m riding shotgun down the avalanche.

It feels like self-defeat. Sometimes, I want to run (gladly and passionately) but there’s no where to run to with arms wide open.

The problem, of course, is me.

Do you ever feel that way?

How not to Write Poetry

Season 3 Finale of The Walking Dead

Click and buy the mug shown below and help feed kids.